A Beginning From An End

A Druid Dialog: What is ADF?

Taken at the Wellspring Festival in 2010, former ADF Archdruids talk about what our church is to them. Speaking are Rev. Kirk Thomas, Rev. Robert "Skip" Ellison, and Rev. Jeff Wyndham (Ian Corrigan).

A Further Preview of the DP: Pagan Piety, Keeping the Old Ways

[This article is an excerpt of materials included in the ADF Dedicant Path, which is included with ADF Membership. Members can access the information on the members site.]

A Further Preview of the DP: Right Action

In 2005, when Hurricane Katrina hit the Gulf Coast of the US, Archdruid Emeritus Rev. Isaac Bonewits, the founder of ADF, pledged to recognize the Groves, Guilds, SIGs, or other ADF subgroups that provided relief for the disaster.

Where does ADF style ritual come from?

ADF's ritual style (liturgy) is unique among various druid and Neopagan rituals because we developed it from scratch.

Articles on Our Cosmology

When we were children, many of us learned about Greek and Roman mythology as if they were the same. Perhaps our parents alternated reading to us at bedtime watered down versions of classical mythology and Grimm's Fairy Tales.

Note: This essay is based on my workshop of the same name, and I hope to create a video version to accompany this.

An important and ancient portion of the magical art is the making of signs of power, and their use in consecrating objects of power.

Concerning the Taking of Omens

(Note: This article is an excerpt, copied with permission, from the author's book Sacred Fire, Holy Well.)

This short article is an effort to outline some of the basic concepts of Pagan theology on which ADF's work has traditionally been based.

Cosmos, Chaos, and the ADF Priest

Cosmology is the study of the structure of the universe, the cosmos, or a description of that structure. "Cosmos" is related to the word "cosmetic," which tells us one thing right off - the cosmos that is described is beautiful in its structure.

[Note: This article is a transcript of a discussion that occurred at the Muin Mound Madness festival in 2004.]

As we all know, ADF is committed to public ritual. That commitment impels us to consider how we may best serve the community. As Chief of the Seers Guild, I presented a workshop on Divination in public ritual at Desert Magic Festival.

In order to understand the religion and magic of the Pagan Celts it is important to comprehend their basic symbols and cosmology. Every culture has a basic map of the universe, physical and spiritual, that allows its people to understand their place in the cosmos.

ADF rituals often include a few Irish phrases, so the following guide to Irish for Druids is copied on our site for easy reference. 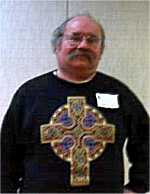 All translations and spoken phrases are by Alexei Kondratiev (right).

Collection of various prayers and devotionals towards Gaulish gods and goddesses.  Any prayers that come in multiple languages will indicate that they do.

The following information is a basic primer to get people started with Gaulish Polytheism within ADF.  As time goes on, we will modify and add to this information as our Hearths grow and develop.

This ritual was written and performed prior to the development of our current Order of Ritual in 2006. It is archived here for historical reference only, and does not reflect a current ADF ritual.

This odd looking word, *ghos-ti, is the Proto-Indo-European word which refers to the reciprocal relationships of hospitality.

The following articles are historical documents: most of them no longer reflect exactly how we do ritual today, but can provide a deeper, more full understanding of how our ritual style and structure have developed.

Indo-European Paleopaganism and Its Clergy

For those wishing to begin a Roman mode of worship, probably the best place to begin is in creating a suitable worship space - the lararium[1] and the hearth.

Just What is Equinox

Let's not waste any time. I've worked on this definition , for years so here it is:

Honoring the Gods, the Nature Spirits, and our Ancestors.

In the Druidic tradition the obligation to perform public ritual has always been strong. The ancient druids were the administrators of ceremony and acted as sacrificers, diviners and counselors for their folk.

One of the most daunting tasks I have procrastinated undertaking with respect to my writing on the Religio Romana is the Roman "Wheel of the Year." Depending on which version of the calendar one consults, somewhere from two thirds to three-quarters of the year in the Roman cal

In order to fully explain why we do the things we do, it's important for us to look at the entire vision of the cosmos: what are the assumptions we make about ritual, and how do they play into the eventual development of a "core

(The following is a short paper I wrote as an undergraduate on the topic of the Slavic Paganism. Specifically, it focuses on one author and his application of linguistics and comparative mythology to the question of an "Old East Slavic Pantheon".

On the Symbols of Druid Identity

On the Value of Polytheism

From its founding, Ar nDraiocht Fein has chosen to approach divinity and spirit through the traditional models of Indo-European polytheism.

I have stolen my title from Wendy Doniger O'Flaherty's marvelous study of what can be learned from studying the myths of and about others (and a good thing it is that titles can't be copyrighted).

Preparing for a Druid Ritual

Reflections on being an Urban Pagan

Deciding to follow a nature-based religion if you live in the midst of a city can be a challenge. Druids who live on farms or in woods, or even in the midst of suburban greenery can often step outside and immediately be in contact with the Earth.

Sacred Space, an Exploration of the Triple Center

There are three great gates that are central to Druid rites: The Well is the Deep Gate, The Fire is the Bright Gate, The Tree is the All-Reaching Gate.

Sacred Water Flow in Me: A System for Using Consecrated Water in Ritual

Water- it not only covers 70% of the Earth's surface, but makes up 90% of our bodies as well. We can live for over a week without food, but without water we would die very quickly.

Sacrifice, the Indo-Europeans, and ADF

Many scholars have shed much ink trying to decide what the meaning of sacrifice is. Their efforts were doomed from the start. They were trying to find the one thing that lay behind all sacrifices. There simply isn't one.

Step by Step through A Druid Worship Ceremony

© Isaac Bonewits
Originally published in Druid's Progress #4
This document reflects our early ritual step-by-step, prior to 2006. Our current outline can be found in our Order of Ritual.

Taking It All Home

Making the gods part of our everyday lives is simpler than we often think.

The Basic Principles of Liturgical Design

The Core Cult in Druidic Rites

Our Druidry has, until now, focused on the business of providing meaningful, powerful rituals for large and medium sized groups. Often this takes us toward viewing spiritual ceremony as a series of tasks - speech, thought, movement; set up, presentation and take-down.

The Dedicant Path (DP) is ADF's beginning training program that serves as a year-long introduction to the beliefs and practices of Our Druidry. It is also the prerequisite for other ADF training systems such as guild study programs.

The Goals of Group Ritual

A Ritual always has more than one goal. There may be many goals or only a few. How many goals a ritual has does not affect how complex a ritual is. The goals of a ritual will affect what is said and done, but not the difficulty of the ritual.

The Intentions of Drudic Ritual

We begin our exposition of the ways of Our Druidry with the intentions of our rites.

The Nature of Sacrifice

The Necessity of Doing Public Ritual

This year at Imbolc we consecrated our new Bilé. As the maker of it, I thought I might offer some explanation of the symbols and inscriptions that went into it. Our previous Bilé was made by Earrach, our Senior Druid.

The Norse Wheel of the Year

The Place Of Ritual

The Worlds and the Kindreds

The Three Realms: The universal pattern of the four 'elements' is understood by Celtia differently from the broader magical movement.

Just ask the average suburban seven year old two days before Christmas. Perhaps you still have that child inside you?

How to Be a Nature-Worshipper When You're Surrounded by Concrete

What I Expect from My Church

Why Do We Druid?

"I AM A POWERFUL DRUID PRIEST OF THE OLD WAYS! [or insert any other tradition here...] I WAS (RE)BORN INTO THIS WORLD TO SERVE THE GODS AND TO RENEW AND REVITALIZE THE LOST WISDOM OF THE ANCIENTS!!" (Yeah yeah. Yadda yadda yadda.

When I first opened the Rgveda I knew only that Vedism was part of the eastern branch of the Indo-Europeans. I did not yet know of the complex deities overflowing with contradictory tales.

Working Magic with the Two Powers

(Note: This is a transcription of a workshop given at Wellspring in 2005)

The following articles have to do with the practical work of Our Druidry: