This year at Imbolc we consecrated our new Bilé. As the maker of it, I thought I might offer some explanation of the symbols and inscriptions that went into it. Our previous Bilé was made by Earrach, our Senior Druid. It began to split while being used as a Maypole this past Beltain. It served us well for nine years.

The Bilé is the center of our Hallows. It represents the axis mundi, the point where the worlds intersect. It combines elements of the three realms: land, sea, and sky. It can be viewed as the Yggdrasil, the World Tree, a visible representation of our cosmology. During our rites, when we open the gateway between this world and the otherworld, the Bilé stands at the gate.

Our Bilé is nine feet tall. From the floor to the lip of the fire-cauldron, it reaches through the nine worlds. It is constructed primarily of two sections of inch-and-a-half-thick oak, pole stock. It is constructed in sections to make it easier to transport. The bottom section can be left out to reduce the Bilé to six feet tall; useful if we need to set up in a lowceilinged room. The Irminsul is a rectangular pillar, with four triskel-carved branches radiating from it. The shape of the Irminsul is roughly based on a drawing by Stone Creed Grove's Senior Druid, Ian Corrigan. I felt this shape was better suited to our use of the fire atop the Bilé, as opposed to the traditional Norse Irminsul, which sweeps dramatically upwards. The fire pot is copper with brass handles. The base is a tetrahedron eighteen inches on a side. It is made from laminated pine. There are weights hidden inside to make the tall Bilé stable on the relatively small base. 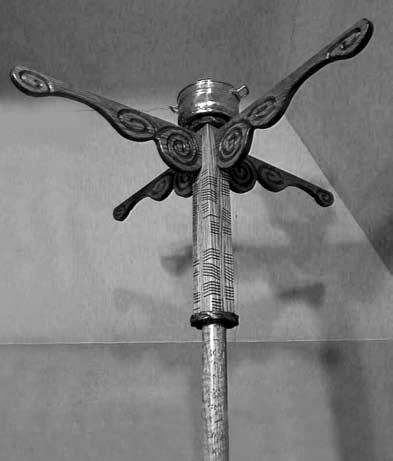 The symbols and inscriptions are a little trickier to explain. Sassafras is a culturally mixed grove, unusual for ADF. In turn, we honor Irish, Welsh, Norse, Anglo-Saxon, even Greek and Slavic deities. We are truly Pan-Indo-European, and I wanted the Bilé to reflect that. I tried to incorporate those symbols and ideas that have struck me as fundamental to the work of Sassafras Grove.

The base is carved on the three visible sides, with images of the Norns, the three sisters who sit at the base of Yggdrasil, spinning and weaving the web of Wyrd. Urdr is the elder, she is robed in black, and pulls the silver thread of our lives from the tangled skein of the past. Verdandi is a woman of childbearing years, robed in red. The eternal moment, at once always now, always fleeting, she squats, birthing the moment, measuring the span of our years. Skuld is the faceless maiden, robed in white. She is the yearning promise, the hope of tomorrow, forever over the next rise, around the next corner. She kneels, cutting the thread with bronze shears.

The lowest pole section is carved with images of the divinities we honor as a Grove. Emerging from the base is the Salmon of Knowledge, symbolic of Taliesin, our bardic patron. The shining brow, thrice-born Taliesin bestows the gift of Awen, inspiration, so that our speech might be pleasing before the Gods. Hu Gaddarn, the reaper, with his sickle, and a bag of plenty, inviting us to share in the work, the labor of life. You reap what you sow. An Dagda, the Good God, with his ponderous belly, wearing the torc, and limned hair. He holds his club in one hand. It can kill a hundred with a stroke, or restore the life to the dead. At his feet is his cauldron, his male-womb. From it he pulls a mute warrior, for those who have been to the otherworld can never put it into words. The warrior's spear points defiantly toward the belly of a raven, one of three, the Morrigan, the three sisters of death and ending. Not evil, not cruel by design, but inevitable, and merciless. The enemy is not death, but the fear that robs us of life. Girding the carvings is the cross of Brigid. The woven rushes, symbol of hearth and home. Goddess of the forge, poetess, and healer. Suil lin a'Bride. At the top of the carvings is Lugh Lamfadha. The long handed, many-skilled child of the sun. He wears the torc and kilt, standing proud, bearing his spear of light, an tsleg boi ac Lugh. He proffers the sun wheel, the wheel of the year.

The middle section is carved with Anglo-Saxon runes. The inscription is a prayer of supplication to the Earth Mother, it was written down in a book of Anglo- Saxon charms and spells, from the eleventh century. It is probably much older. I couldn't find it in old English, so it is spelled in modern English. Two symbols are carved above the middle joint. One is the symbol of Awen: /|\. The other is the Druid's sigil, symbol of Ár nDraíocht Féin, our own Druidry. The Irminsul, and the fire cauldron top the Bilé, symbolic of the solar radiance, the fires above. The four branches point to the four corners of the world. The edges of the pillar are carved in Ogham: "Behold the Sacred Fire, Sacred Fire burn within us." I must admit the copper cauldron came from Marshall's houswares department, $4.99 + tax ;). That's about it. May the Gods be pleased, and bestow their blessings.

Page Information:
"The New and Deluxe Sassafras Bilé." submitted by ChrisSetlock on 15 May, 2019. Last modified on 19 February, 2022.
Page URL: https://www.adf.org/articles/working/sassafras-bile.html