An important and ancient portion of the magical art is the making of signs of power, and their use in consecrating objects of power. From the first carvings in the ancient tombs of the stone age, through the symbols graven in gold and bronze, to the sciblings of monks and the knots and spirals of craftsfolk, graphic symbolism has always contained meaning beyond words alone.

The simple truth is that we inherit nearly nothing from the ancient Druids about how they used signs and symbols. We do not know whether the swirls and angles of old carvings held magical meanings, much less what those meanings were. If they shaped talismans of wood or metal, we do not know how those looked or what symbols they bore. Even the ogham letters are obscure, their use in magical writing partially revealed in tales, but still far from clear.

In the effort to create modern Druidic magic, the creation of sigils, emblems and signs of power seems inevitable. In all our efforts we are forced to apply various modern magical methods to the bits and snippets we inherit from pre-Christian Europe. These notes are an effort in that direction, an attempt to create .sigils. - that is, abstract linear figures that convey magical ideas and powers - that are meaningful in Our Druidry.

The Meanings of Celtic Patterns

It would be lovely if the swirls and knots of celtic artwork contained hidden meanings, keys to the Celtic Pagan worldview. Unfortunately, history tells us otherwise. Knotwork is just as likely to come into Celtic lands with the church, from Syrian teachers, and from the Vikings as from any more primordial source. And while the vegetal and fractal forms of Celtic art are highly suggestive of Otherworld presences, we know nothing of their meaning, except what we can imagine from gazing on those antiquities.

All that said, it.s possible to make a simple distinction that may be useful in designing Druidic signs and sigils. The flowing, organic patterns of La Tene art might be associated with the Underworld Power, the Waters that flow beneath all being. In complement, the Heaven Power, the World Order that draws pattern out of potential, might be represented by knots and key patterns. Starting from that simple basis, we might be able to design meaningful patterns to decorate and enliven our magical tools and power objects.

These sigils were designed for a magical working intended to allow a small group of participants to create powerful magical talismans. The working used the basic ADF ritual format, adding elements of practical magic. These signs do have roots in the iconography of IndoEuropean Paganism, but have been rendered in an "occult" style that is meant to titillate the imagination and inspire the mind. They are offered to the reader in hope that they may be of some use in future Magic work. 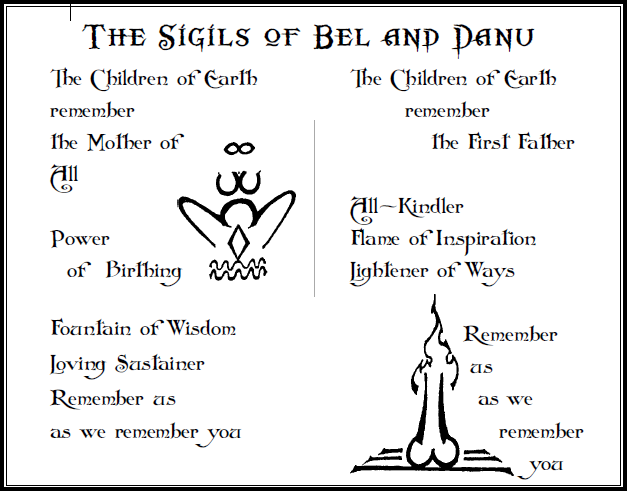 The Making of Talismans

A talisman is an object charged with the intention or force that it represents.

The Making of Sigils

Any magical intention can be expressed in an artistic and arcane sign by this simple means. First, devise a simple sentence to express your intent, i.e. .This is my will, to open a Gate Between the Worlds.. Second, remove all duplicate letters, i.e. thismywlopenagbrd Third, use these letters to create symbols, combining shapes and using artistic license. The intent is to completely bury the intention in powerful, evocative symbols.