On Saturday, June 11, 2011, a small group got together in Connell, WA to bring a Pagan/Heathen festival into a state prison for the men incarcerated there. As part of my ministry in ADF, I volunteer as the sponsor for the Druids in the prison, holding High Day rituals there and acting as a religious mentor to the men, many of whom are paid members of ADF. One of them, Thomas Brown, has already completed his Dedicant Path documentation and is now working in the ADF Initiate Program. 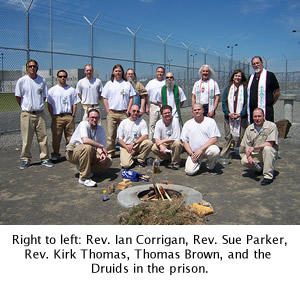 And it was Thomas who gave me the idea to organize this event. One day after ritual he asked me if it might be possible someday to have some local Druids visit and give workshops. That started the wheels turning in my mind. As a Druid, I am the only Pagan sponsor for a religious group at Coyote Ridge Corrections Center, Washington's largest prison, and I know that both the Wiccans and the Asatru men really feel a need for help and support. And then the Rev. Eric Askren, the prison's very supportive chaplain, suggested that a Pagan music or singing group would surely be welcome sometime, should I know of any, and this brought everything together for me. If the men cannot go to a Pagan festival, maybe we could bring a Pagan festival to the men!

I immediately contacted Rev. Ian Corrigan and his wife, Rev. Sue Parker, and asked them if they would be willing to come out to Washington State and work with the Druids at the prison, as well as give a concert for all the men. When they agreed, I then invited Ashleen O'Gaea, an old friend from Tucson who is a prominent Wiccan author (her newest book, Enchantment Encumbered, was written as a guide for Wiccan prison ministry) and a co-founder of Mother Earth Ministries, a Neopagan prison ministry. She would be a natural for this, I thought, and sure enough, she happily agreed. Then I contacted an Asatru friend, Patricia Layfallve, a past Steerswoman for The Troth and the author of Freyja, Lady Vanadis, and she, too, agreed to attend. We now had the basis of what may well have been the first pan-Pagan festival held within prison walls.

Chaplain Askren then got the support of Joenne McGreer, the person in charge of the religious and family programs for all the prisons in Washington, and together they managed to get three chaplains from other state prisons to attend for this opportunity to learn about our minority religions. Joenne, herself, attended, and she brought Barbara Lauderdale, who is a prominent sponsor for Wiccan and Asatru groups in prisons on the other side of the state.

The day itself started at 8 am with a plenary session where everyone got together for introductions, and I began the event with a prayer to the Earth Mother, thanking Her for Her support and asking Her to aid us all in finding fellowship and unity that day. Then the men broke out into three groups for the day's activities. 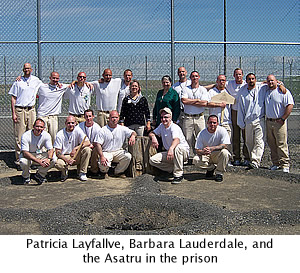 Patricia and the Asatru went out to the prison's stone circles for ritual (they held a blot to the Ancestors), Ashleen met with the Wiccans for a question and answer period, and Sue gave a workshop for the Druids on Indo-European goddesses. After this, the Asatru came in for workshops with Patricia, Ashleen continued with workshops for the Wiccans, and the Druids went out to the stone circles for an ADF Unity Rite and to hear two of the men give their First Oaths. Since the men had been listening to me for the last two years already, I thought it best to stand back and let Ian and Sue do the bulk of the rite, though three of the men performed the Kindred Invocations. Thomas Brown appeased the Outdwellers, and as the only ADF Dedicant among the men, was also honored to read the list of Solitaries and Groves (including their own Frog Stone Circle Prison Worship Group) during the Unity Rite.

At the beginning of the rite, the Druid men presented ADF with a pendant icon of Isaac Bonewits, handcrafted in beadwork by them in honor of our late Founder. Ian wore this amazing piece of art for the duration of the rite.

The third workshop section involved the Druids returning to the buildings for a workshop by Ian on trance and trance induction, and more Asatru workshops with a question and answer period. Ashleen and the Wiccans went out to the stone circles for their rite celebrating Litha, and every man got to pull a blessing from the rays of a sun symbol that she had created for the ritual.

Lunch was managed with each group eating independently with a ‘shared meal'. The prison provided a lunch of peanut butter and jelly sandwiches, fruit, and brownies, so our vegetarians in the group could join in with everyone else.

Once the workshop sessions were over, Ian and Sue held a concert for an hour and a half, singing sea shanties, pirate ditties, and Pagan songs. While some of the men appeared skeptical at first, by the end everyone was applauding and tapping their feet, and the concert was a great success, ending with the upbeat and affirming song, ‘Ordinary Day'. 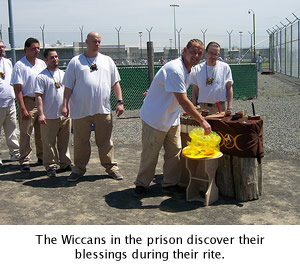 For dinner the men went to their usual dining hall while the chaplain treated us visitors to a buffet of sandwiches, fruit, vegetables, hummus, cookies and chocolate. This was another chance for the outside chaplains, who had been attending workshops and rituals all day with the rest of us, to ask questions. I gave each of them (including the other visitors) a copy of the ADF Dedicant Path booklet (with permission from the Mother Grove), and the other presenters also donated books to the chaplains and to the prison library.

This was followed by the roundtable where we all talked about Magic, with Ian setting the pace with a short discussion about what we meant by the word. What became obvious was that we all favor different magical techniques, which is fitting for a group of diverse Pagans.

All in all this festival day lasted 13 hours. It was intense, but fulfilling, and I hope that similar prison festivals can take place someday in other prisons and for other incarcerated people. The mere fact that five prominent Pagans were willing to come and celebrate for a day with the men gave them a sense of validation, an understanding that they truly aren't forgotten, and that they, too, matter in the world. And this can only be a good thing!